Connecting Columbus to the World

Education Exchanges connect institutions from Greater Columbus and our sister cities to develop opportunities for students to travel and learn about other cultures.

Partnering with Columbus City Council and Pan African Connections, a group of six youth ambassadors traveled to Accra, Ghana in the summer of 2018.

While in Accra, the students met with high school students in Accra and visited the many cultural and historic sites in the region, including the Cape Coast Slave Castle. They also met with elected officials including the Mayor of Accra.

Upon their return, two students were selected to represent the City of Columbus at the 2018 Sister Cities International Youth Leadership Summit in Aurora, Colorado.

This exchange between Columbus state Community College and Berufsschulzentrum Für Elektrotechnik Dresden becan in 2018, when ten10 students from Dresden came to Columbus for an 8-10 day internship to explore their sister city and learn about the field of Electrical Engineering and IT. in 2019, ten Columbus State Community College students visited their partner school in Dresden to learn about workforce development programs.

Thanks to the support of the City of Columbus, Dresden Sister City and local companies, this exchange is at no cost to the students. This permits the students to learn more about their STEM career field while experiencing a different culture. This program is unique since less than 3% of U.S. community college students study abroad. 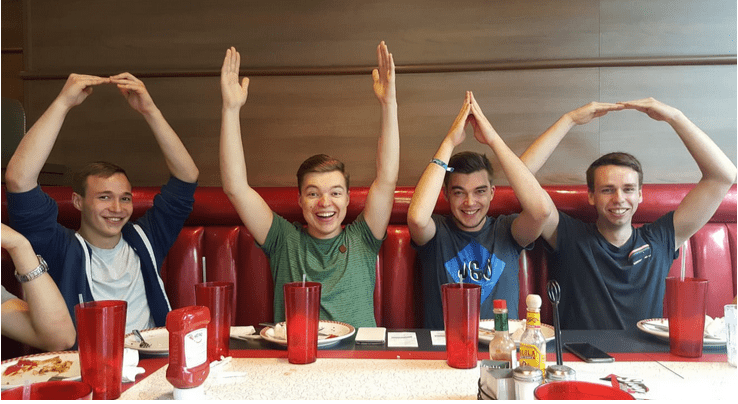 Official Delegations are exchanges which are led by elected officials to build and expand our international connections. They can be to celebrate a particular event or to strengthen our connection with our sister cities.

In February 2020, Columbus City Council President Shannon Hardin and Columbus City Council Member Emmanuel Remy attended the City of Dresden’s Commemoration for the 75th Anniversary of Bombing of Dresden. The Mayor of Dresden, Dirk Hilbert, hosted representatives from all of Dresden’s sister cities. As part of the celebration, 11,000 local citizens came together to create a human chain in remembrance of the victims of the bombing. 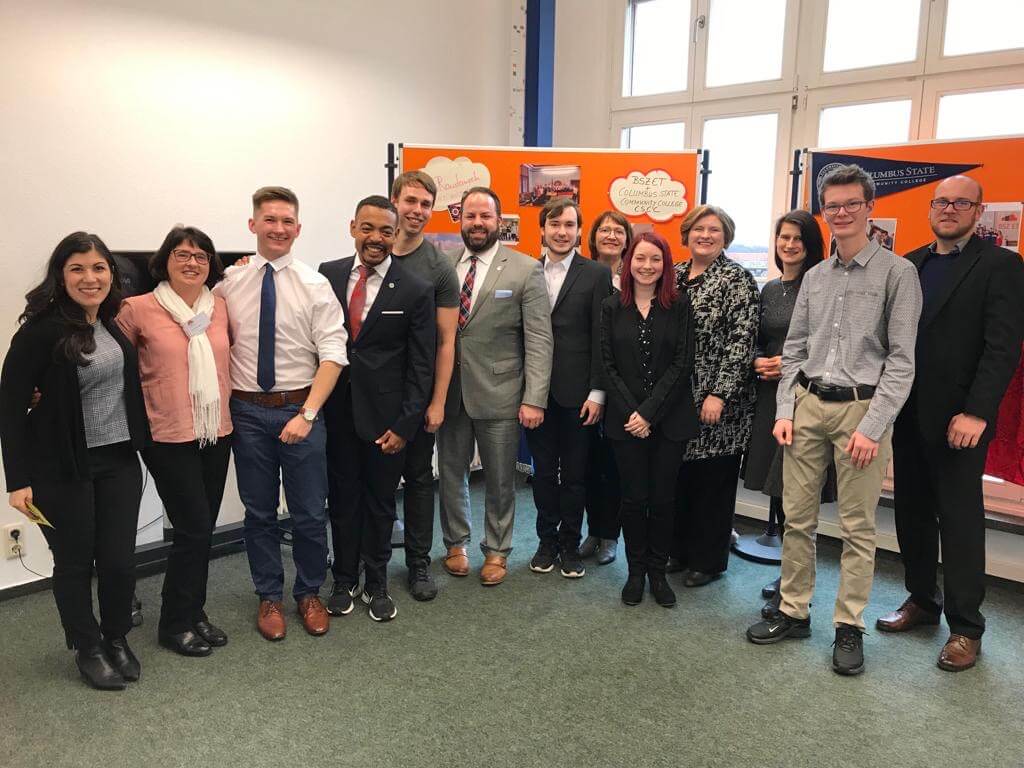 In October 2019, Columbus City Councilmember Priscilla Tyson led a delegation to Genoa, Italy in order to accept the International Communication Award from the City of Genoa for Columbus’ work on the Paganini Violin Exchange. This prestigious award honors any entity who has helped to highlight the culture of Genoa globally.

The Thousand People of Columbus exhibit, which consisted of the 1,400 portraits captured by photographer Timothy Costa taken in 2018, were displayed throughout public venues across the city. 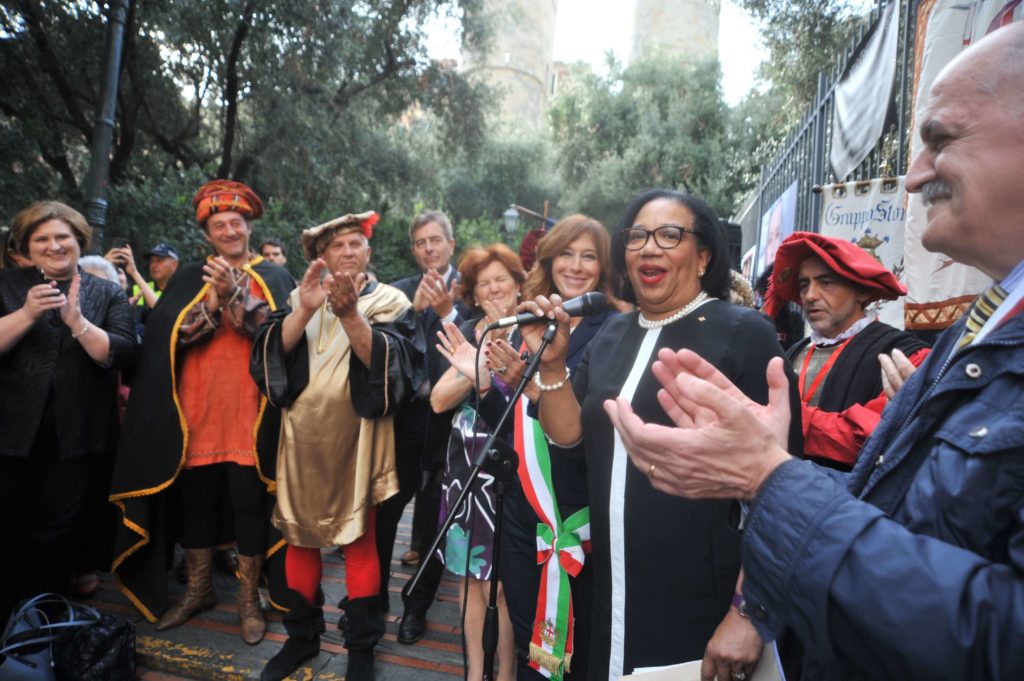 These exchanges are focused on highlighting the cultural aspects of Columbus and our sister cities. They can either be inbound, where we bring a cultural item or artform to Columbus, or outbound, where we send a group to explore or share our local culture.

Euroflora is a large European exhibition of flowers and plants and takes place every other year in our sister city of Genoa, Italy. The event brings in approximately 280,000 visitors and the City of Columbus has been assigned a plot of land to build an exhibit in 2022. 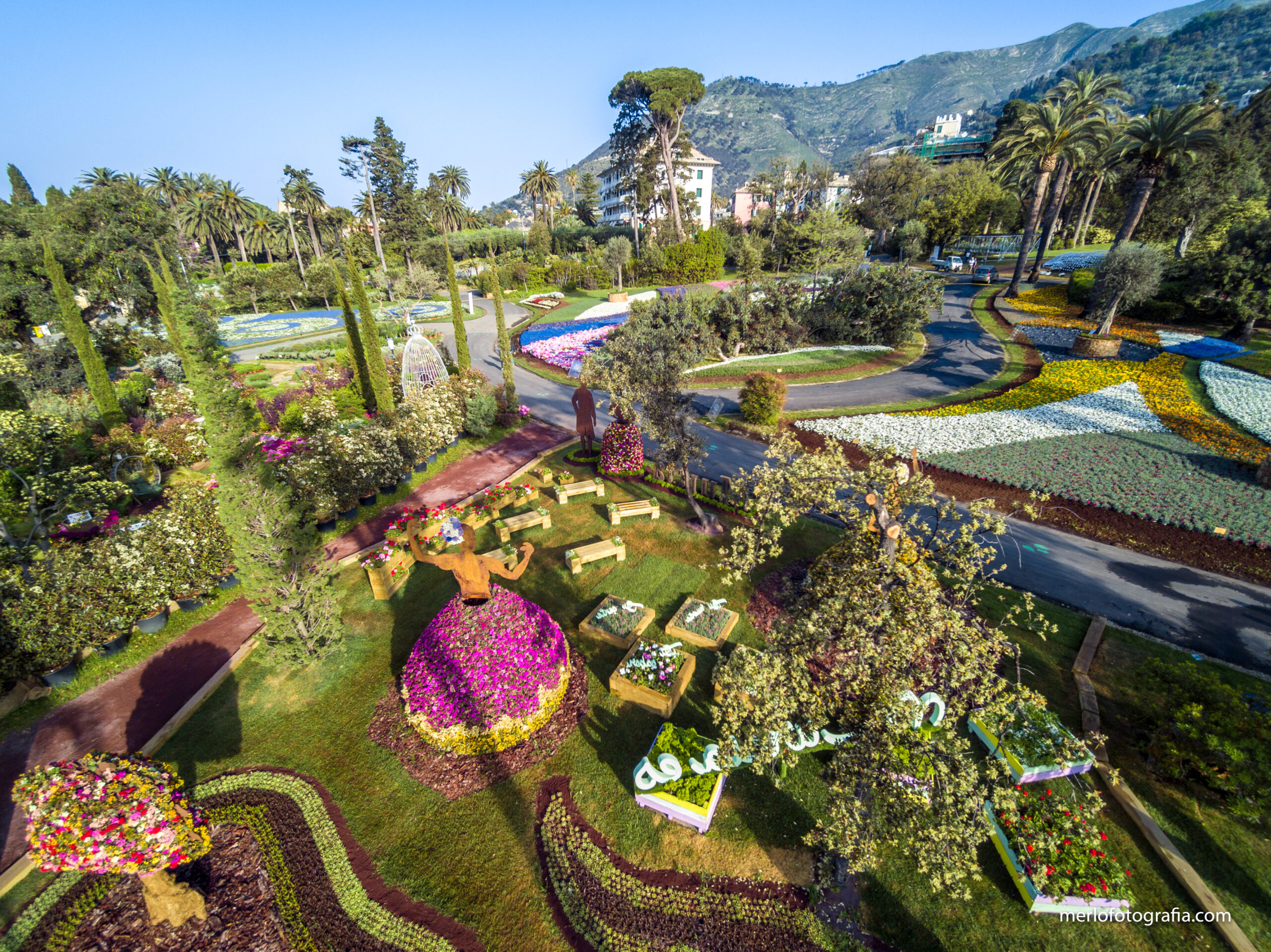 In May 2019, Greater Columbus Sister Cities International (GCSCI) partnered
with our sister city of Genoa, Italy to bring Niccolò Paganini’s treasured “Il
Cannone” violin to Columbus. This beautiful instrument is over 275 years old and is considered by many to be the most important violin in the world.

During its stay, the violin was on display to the public at the Columbus Museum of Art. On May 15, Columbus Symphony Concertmaster, Joanna Frankel, performed on the violin to a sold-out audience at the Ohio Theatre. The Mayor of Genoa, Marco Bucci led a delegation from Genoa to celebrate this historic exchange. 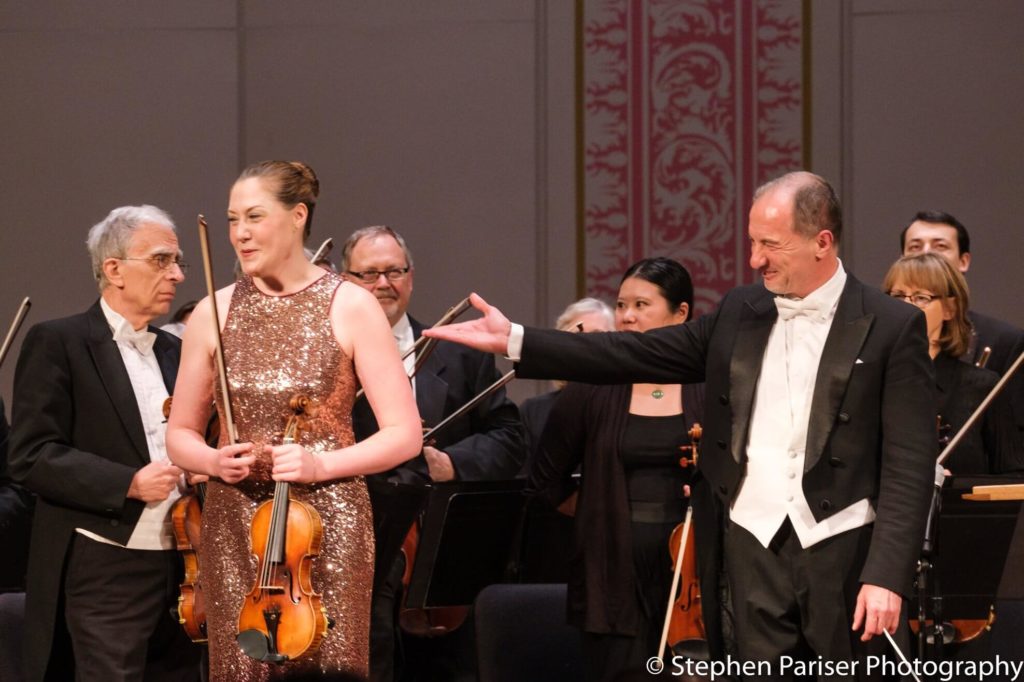 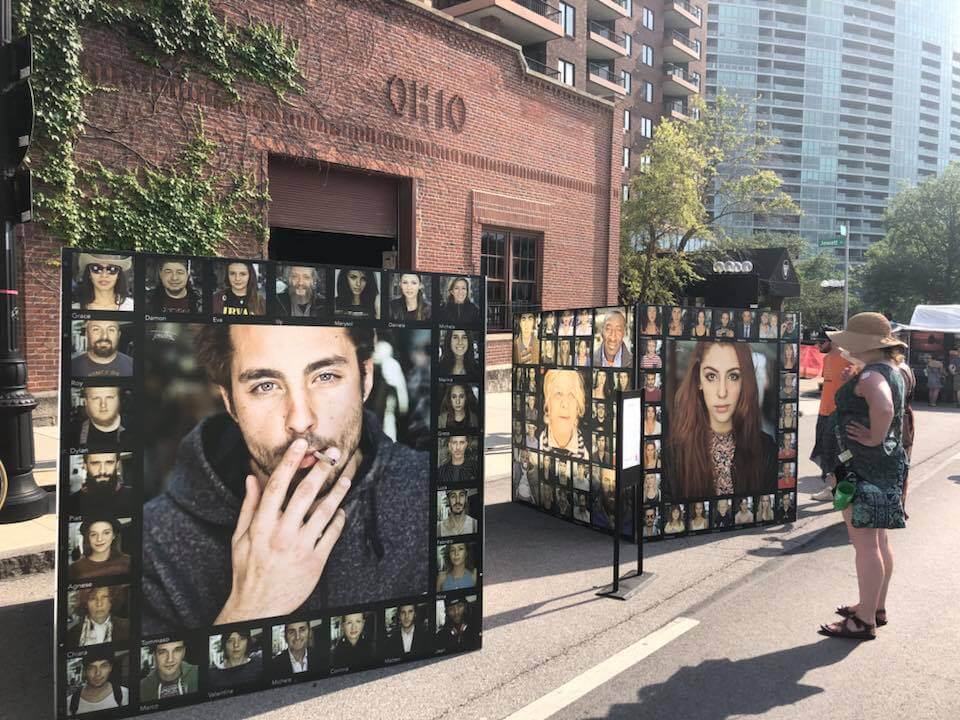 Pesto originated in our sister city of Genoa and every two years, they hold a championship to crown the world’s best pesto maker. In order to select a finalist to represent Columbus and participate in this global competition, GCSCI organizes a local pesto championship. Ten contestants are provided with a mortar and pestle and seven ingredients to make their best Genoese Pesto. 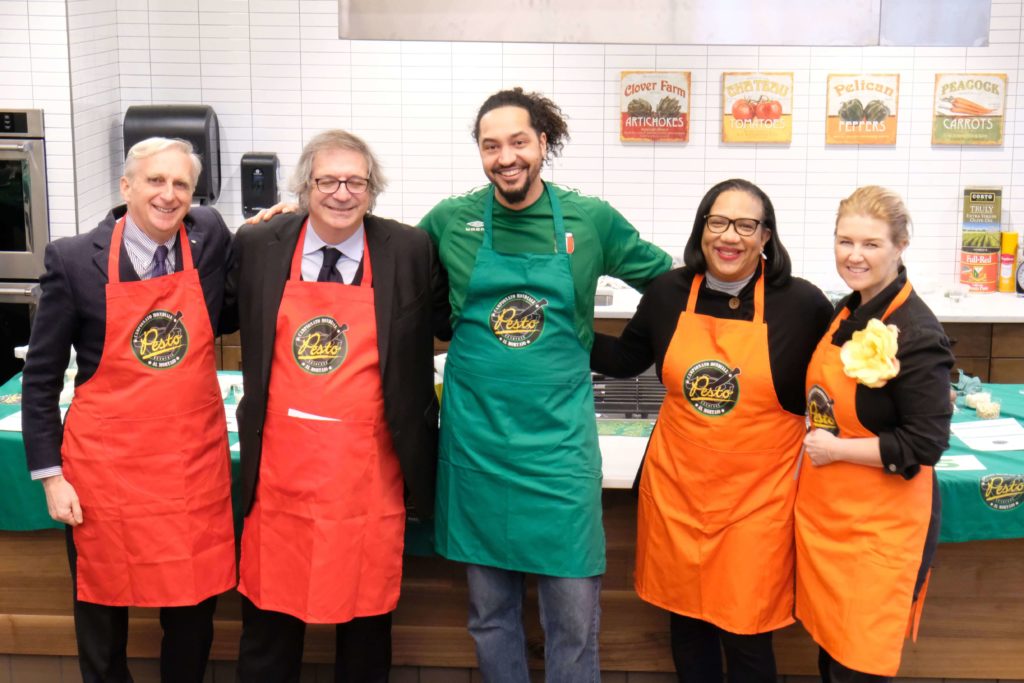 Partnering with Nationwide Children’s Hospital Marathon and Dresden Sister City, the Sister City Marathon Exchange has been taking place since 2012. This program is intended to promote international exchange by sending local runners to represent Columbus as Cultural Ambassadors to run a half or full marathon in either the Dresden, Germany; Hefei, China; or Curitiba, Brazil.

This program offers a once-in-a-lifetime experience to Greater Columbus residents to represent our city as a cultural ambassador in a foreign country and create meaningful, lasting connections. If selected for this opportunity, free race entry, homestay with a local host family, transportation on marathon weekend will be provided.

Five runners are also invited from Dresden, Hefei and Curitiba to participate in the Nationwide Children’s Hospital Marathon each year. 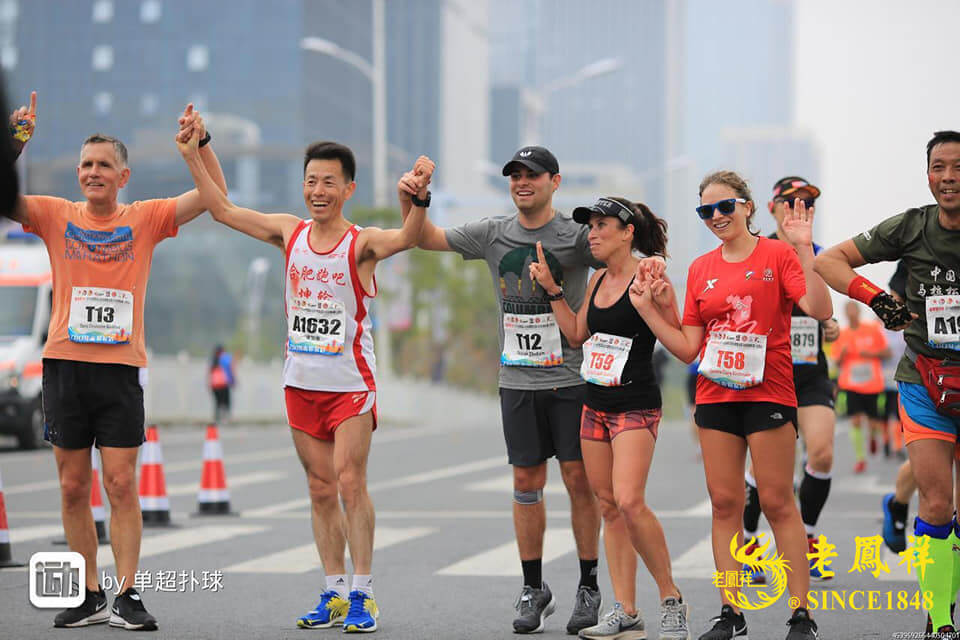 In Spring 2018, GCSCI organized a delegation led by Franklin County Commissioner John O’Grady to our sister city of Seville, Spain. The goal of this project was to learn from our Spanish counterparts about their transportation system, smart city technologies and renewable energy initiatives

The delegates traveled to Madrid, Malaga and Seville and spoke with subject-matter experts and local businesses about smart transportation initiatives. 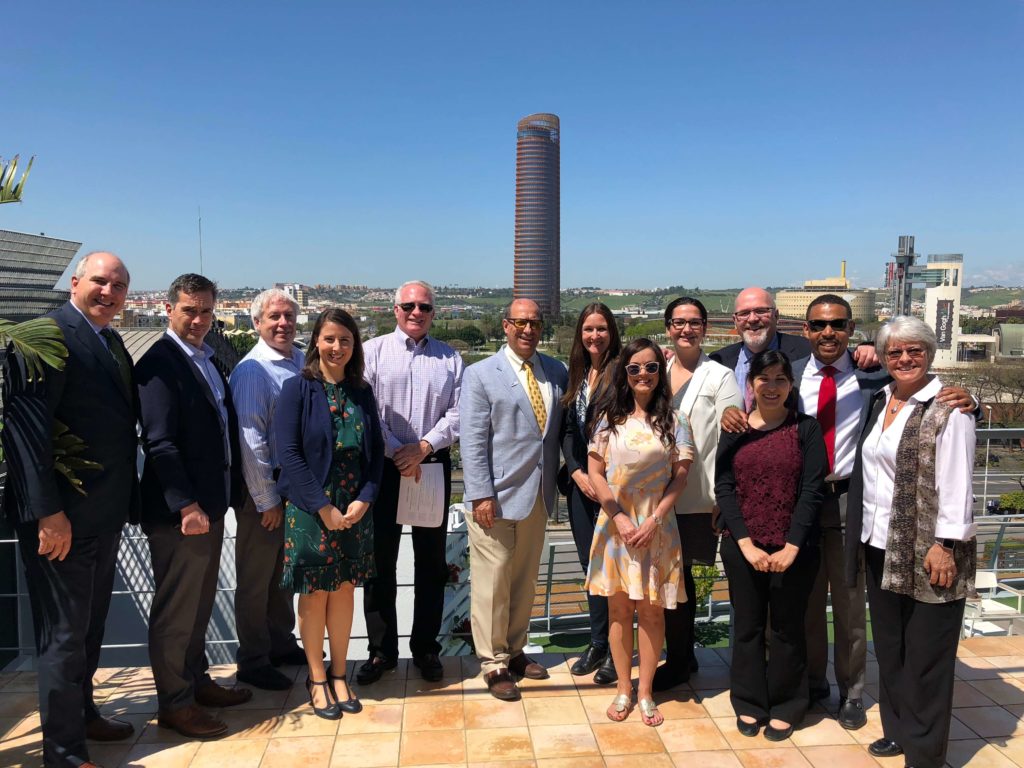